Posted 3 years ago by Graham in Repairs 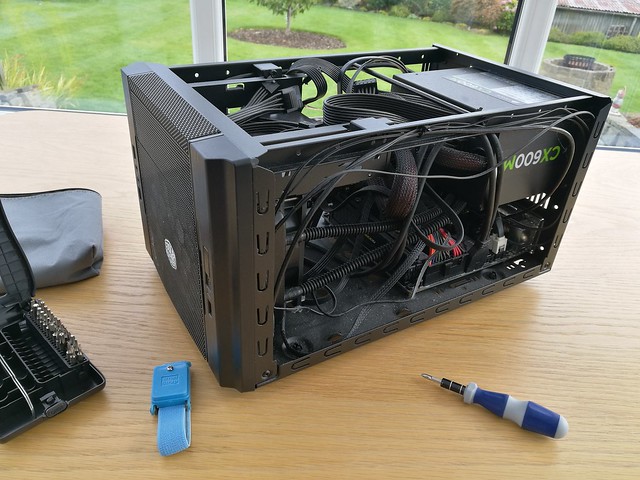 Adam from Trawden called with a noisy mITX system that was shutting down without warning. The system is based on a Coolermaster Elite 130 so is easy to access, a few screws and gentle tug of the front panel and we're inside... The dust on the radiator of the water cooling system looks bad but there's probably not enough build-up to cause thermal shut downs. We'll clear it out anyway. The radiator sits between two 120mm fans and they were in the correct configuration, pulling air through the front and expelling it out the top. So far so good.

Sometimes air bubbles get caught in the pipes of the cooling system, disrupting the flow of liquid. Turning the box upside down to dislodge these can help, but the problem here is more serious than bubbles. After booting the system back up it's clear from the lack of vibration on the pipes and heatsink that the pump isn't working, despite the light showing that it's powered. I came back the next day and removed the Seidon 120V unit, replacing it with a new one. HWiNFO now shows idle temperatures in the mid-20s instead of 80c+. The highest temperatures we saw were a little under 40c at load so it's clear that the defective pump was the cause of the problem.

Water cooling can be had for under £50 but failures are quite common and are more expensive to fix than an air cooled system, where you'd just replace a defective fan.